Mörk’s Brew House is an unmissbale new concept store and cafe in North Melbourne. It is ALL ABOUT the Chocolate – particularly the hot chocolate. The quality is unparalleled, the prices are unbelievable and the staff are knowledgable and passionate about all things cacao. ‘Mörk’ means ‘dark’ in Swedish and this company has been supplying Melbourne cafes for several years but made the leap this year and opened their own specialty store in the building of an old bakery. We arrived at a miraculously quiet moment in the early afternoon but within fifteen minutes the place was full of avid chocolate consumers! Had we been a few minutes later we definitely would have needed to join a substantial queue… which would have been well worth the wait!

If you’re lucky enough or patient enough to eat-in, you begin with complimentary sparkling water which is infused with specks of vanilla bean. After receiving a fantastically detailed description of what was available, I ordered the rather theatrical Campfire Chocolate which is one of their signature drinks. You receive a wooden board upon which is an overturned glass filled with beechwood smoke, a pinch of black smoked salt, a beaker of delicious hot chocolate and a house-made toasted marshmallow.

So – how was it so theatrical? Well, to enjoy this beverage you have to flip the glass of beechwood smoke over and pour in all of the dark hot chocolate before all the smoke escapes into the surrounding air! The idea is that it should evoke memories of hot chocolate sipped at the side of a campfire, and it certainly made me wonder when we would next go camping! Ben ordered the Layered Chocolate which featured dark chocolate, warm custard and orange zest. With several of Mörk’s drinks you can choose options with cow’s milk, soy milk or almond milk. There there are also many water-only based chocolicious options for those who like to keep things simpler! 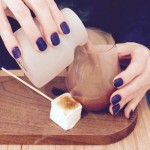 We were powerless to stop ourselves from trying several of the edibles, including a single malt whiskey caramel chocolate piece which was absolutely to die for! When it comes to desserts, my philosophy is that it is generally better to save your “outgoing dollar-spend” and “incoming kilojoule-spend” for smaller amounts of the best stuff rather than larger amounts of average stuff. But – with nothing on the menu costing over $8 the prices really make you do a double-take!

Have a look at our snaps of the menu and countertop to see what you would order. We’re itching to go back already. For chocolate fans it is an unmissable new part of Melbourne! Mörk Chocolate Brew House is at 150 Errol Street, North Melbourne. They are open Tuesday to Saturday from 8am–5pm and on Sundays from 9am–5pm.