Tea is one of those delightful things in life that can be as complex or as simple as you require. The humble tea-bag is up there with sliced bread as one of the ‘best things’ ever invented for those of us after a quick-fix. On the other hand, putting time and care into a careful, intricate brew or even a traditional tea ceremony can manifestly add to the richness of our visceral human experience. Tea can also be responsive to our needs. It can warm us in winter, cool us in summer, calm us at bedtime or pep us up in the morning. That’s before you even start getting into the other health benefits! 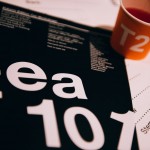 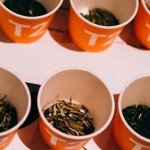 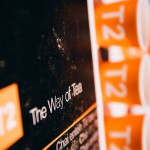 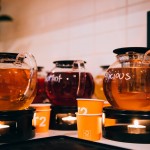 So it was with much enthusiasm that we tried lots of different teas at the amazing T2 Autumn Edition Tea Workshop! Not only did we taste and appreciate over 20 different teas, but also got a very entertaining and informative talk with an in-house tea expert about the science, history and production of tea.

First we tried the ‘Silver Needles’ tea – a lavish bud only picked two days each year at the start of spring. Looking at the little buds, they still had their little fur coats on. I hadn’t realised that the ‘white tea’ descriptor referred to these buds rather than the light colour of the tea itself. White teas have loads of antioxidants but very little in the way of caffeine. They can usually be brewed for up to 7 minutes whereas green tea generally only wants to be brewed for about 2 minutes.

Of course, green teas are also renowned for their antioxidants. The Lung Ching which we tried was a Chinese green tea which had a pleasant asparagus flavour. The Gyokuro, from Japan, had a much stronger seaweed flavour but a creamy body with a bit more caffeine. Japanese teas differ from Chinese green teas because Japanese tea makers don’t wither their green teas after picking but steam them straight away which usually gives them a grassy note and a fresher flavour. Chinese teas have a woodier, earthier flavour.

We then moved on to some flavoured green teas. The Geisha Getaway tasted a LOT like a Pina Colada with scrumptious coconut and pineapple notes! The GMC Sencha tasted like miso soup or popcorn… and was fairly described as ‘guilt-free snack’ (not that I’m known for feeling guilty after snacking!) complete with a couple of floating bits of puffed rice. 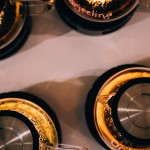 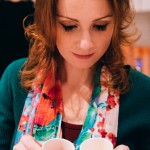 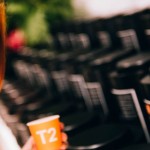 Oolongs are semi-fermented (20% to 80%) depending on whether they are green or black. They are characterised by their silky buttery texture that can be felt on the roof of the mouth. It can break down oily, fatty foods which makes it a great accompaniment with (or digestive after) rich, hearty meals.

Next we learned about the Darjeeling first-flush which is the highly prized first growth on the plants after winter. Like wines, the ‘vintage’ of a first-flush can tell a tea connoisseur about the climate and conditions of the previous year. The Darjeeling tea we tried definitely had some smokey notes but the Assam was even bolder with a smoky, barbecue smell. Then it was time for a big change of pace with the classic French Earl Grey, which can be drunk with milk, with ice or own its own. 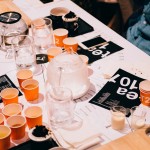 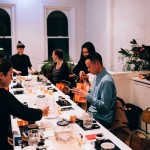 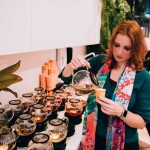 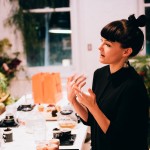 The Grand Yunan tea is a highly-prized Chinese tea with beautiful, twisted golden leaves. It is picked early in the season which means the buds are young and it’s considered ‘high grade’. It has a sweet, tobacco taste even though it isn’t flavoured with notes of chocolate and orange. The Puerh Ginger was one of our favourites… let’s face it, anything with Ginger notes is going to get a big thumbs-up from us!
Puerh is a a black tea from China which is twice fermented. It became famous in the west from the 1970s as it breaks down cholesterol, is known as a great hangover-fix and has lots of great digestive qualities. Traditionally it is fermented in brick-form for 8 years and top vintages can be left for up to 30 years before they’re just right! This give it a real mushroom flavour.

We then moved away from China to wind down with four herbal teas – all caffeine free of course. We started with the Honey Green Almond tea. This one has a truly beautiful flavour, great health benefits and even antihistamine properties. Our host explained that she uses a strong infusion in her muffin mix, which was easy to imagine! The Red Choc Mint tea was to die for… a rooibos (cousin to the honey bush) with added coco bean husk and an additional mint flavour throughout. Iron and magnesium are highlighted as health benefits from this one. With milk the flavour changed dramatically and it really tasted like a liquid dessert! The last two teas we tried were a bit of fun. The ‘Gone Surfing’ tea had a chamomile and lavender thing happening amongst its many tastes. ‘Fruitalicious’ was intense and sweet as the name suggested, with distinctive kiwi fruit and dragon fruit notes.

To finish off the evening we had a little VIP shopping session in the store below… and frankly couldn’t help ourselves. Our picks were the Puerh Ginger, Honey Vanilla, Lapsang Souchong and Red Choc Mint, all of which were stunning value around the $12-14 mark. Yum! 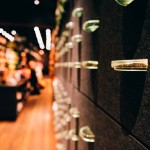 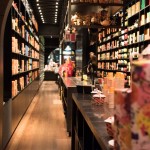 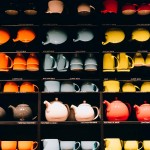 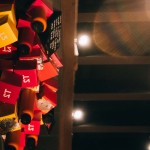 Thanks to the gorgeous T2 team for such a pleasant evening. The range is in stores now so if you are looking for some good gifts or some delicious ways to keep warm, hydrated and healthy this winter we’d certainly recommend heading down to grab a brew or two!